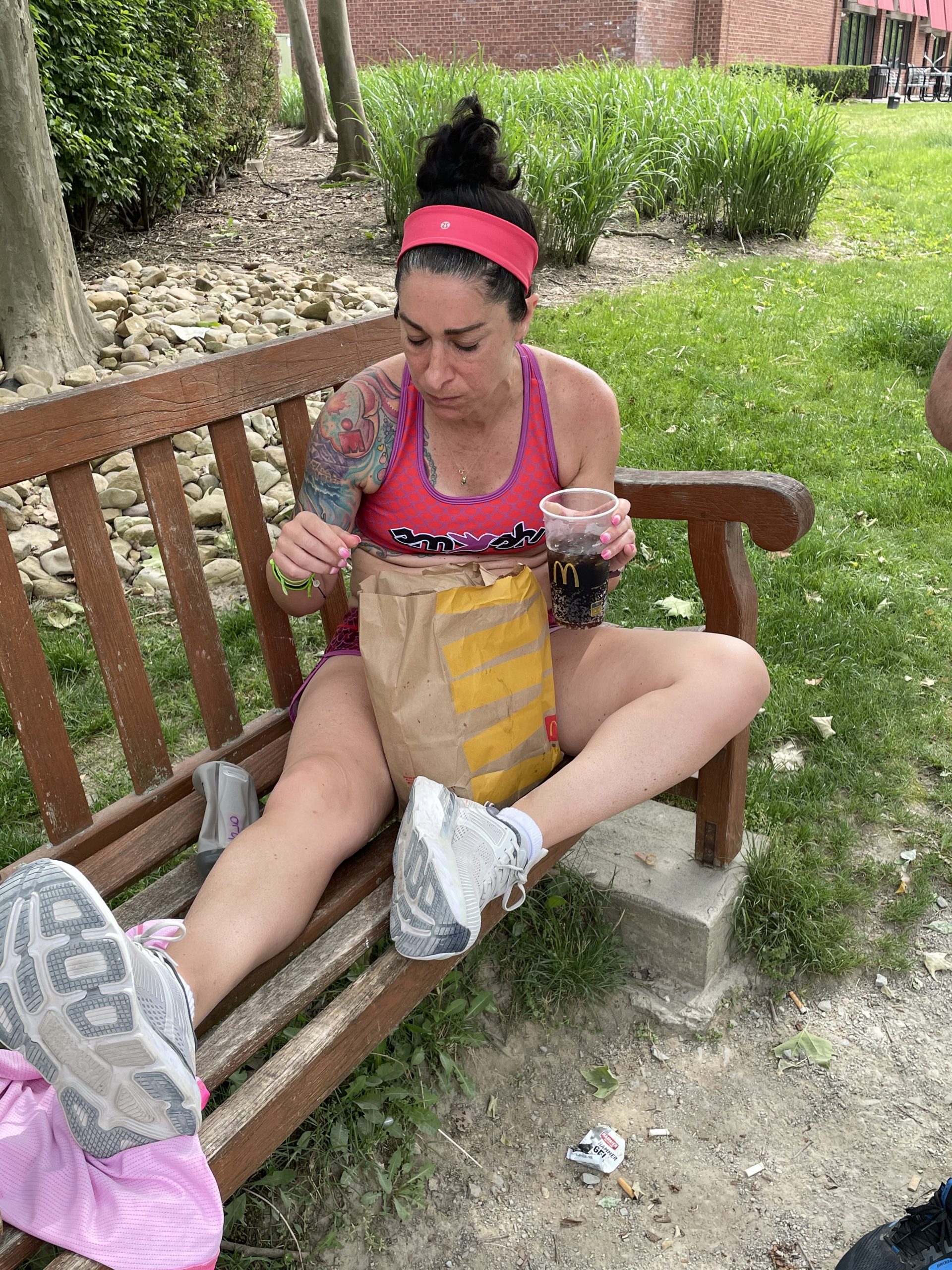 When my friend Josie Vitale mentioned that she was going to attempt a fastest known time on 150-miles of the Great Allegany Passage, I knew she could do it. When she asked if I could help with her nutrition plan, I whole-heartedly said yes and immediately began doing calculations in my brain. For endurance events lasting more than 6 hours, calorie requirements are quite high: in the ballpark of 90 grams of carbohydrate or 360 calories per hour. There is known variability with these estimates, based on the size of the athlete (Josie is petite) and intensity of the effort (Josie knew she would need to go slow and steady to complete this feat). While her body would be relying mainly on carbohydrate to fuel the activity, she would also be able to use fat for fuel because many of the miles would be at a lower intensity. Additionally, her gut would probably handle a mix of carbohydrate, protein and fat better than straight carbohydrate because of the length of the activity. Josie is a multi-Ironman finisher and has done other ultra-endurance events, so having a solid nutrition plan was nothing new to her. However, moving her body for over 2 days without stopping was an entirely new phenomenon and we had to be open-minded to how her body might respond and what types of calories she would be able to handle. After discussing Josie’s normal endurance fueling plan and what she had been doing in training, we settled on a goal of 240 calories per hour.

Josie wanted to do a mix of real food and sports nutrition products. She created a binder with calorie counts of all the foods she was bringing and pre-portioned many items into 100 calorie servings so that the crew would know how much she was consuming and keep her on track. Her daughter, Lulu, is an excellent cook, and helped by preparing homemade spring rolls, as well as pho and lentil soups. Josie packed a variety of fresh fruit, including strawberries, grapes and blackberries and had a selection of savory snacks like pretzels, takis and potato chips. Favorite sports nutrition products included Huma and SIS gels, as well as Tailwind and GU Roctane liquid nutrition. Mini cans of Coke were also on hand for a fizzy, caffeinated pick-me-up.

One thing on my mind as the FKT came nearer was that predicted temperatures were going to be in the 90’s, making this a much hotter environment than Josie had experienced in most of her training. How much sodium and other electrolytes she would need in those hotter temperatures was a bit of a question mark. We had Base Salts and Salt Stick tablets on hand for replacing extra electrolyte losses.

I met Josie in Ohiopyle at about the halfway mark. The report from the crew that had been with her for the first 17 hours was that Josie was fatigued and had lost interest in many foods. She had done really well initially with whole food, especially salty pho, but had fatigued of most of her choices. Even though she hadn’t wanted food in a while, she was moved to tears when she saw a vibrant, pink dragonfruit smoothie that was lovingly prepared by Lulu. She drank the tall glass in its entirety and the change in her mood was obvious. From that point forward, many of her planned foods didn’t work, but smoothies, soups and sports nutrition products became staples.

What worked after 24 hours:

Josie had a good night of hiking and running after the 100 mile mark, late Saturday night. She was positive, full of energy, singing and ticking off the miles when I met up with her again on Sunday morning. She was taking in mostly Gu Roctane, Coke and occasional solid food. From Saturday evening on, what worked well was to have Josie take 4 sips (roughtly 4 ounces) of Gu Roctane every 15 minutes, to stay on track with calorie and fluid needs. It was all going as well as possible until the last few miles when she got into deep exhaustion, a bit of a calorie deficit, and started to doubt her ability to go on. Cue McDonald’s to the rescue. Her husband was nearby with a support vehicle and so were the golden arches. Despite thinking she couldn’t eat or drink anything, she was able to consume over 700 calories fairly quickly and this gave her enough fuel to finish strong.

McDonald’s saved the day in the last 10 miles:

There was a lot to be learned from being a crew member on Josie’s FKT. The power of the human spirit is so strong, and the things I saw Josie push through were absolutely incredible. Being on the outside and looking in, it was clear what a struggle it was to consume food and liquid for such a long event. I thought it was great that Josie had such a solid nutrition plan in place but was willing to change things up when the initial planned foods weren’t working. And in all my years as a dietitian, I’ve never been so happy to see someone eating McDonald’s! I am so proud of Josie, and if you want to read more about her experience completing the FKT, click here.

Angie Dye is a Registered Dietitian Nutritionist (RDN) and a Certified Specialist in Sports Dietetics (CSSD). She is also a Certified Intuitive Eating Counselor.
Angie holds a Master’s Degree in Nutrition Science from Indiana University in Bloomington, Indiana. Prior to starting her private practice, Angie worked as a Clinical Dietitian at the University of Chicago Hospitals. She also served as adjunct faculty at Loyola University in Chicago.

Subscribe via email to be notified of new articles, healthy recipes and helpful tips.